This site is dedicated to Gilbern Cars and the Owners Club that serves Gilbern enthusiasts based in the United Kingdom, Europe and all around the world.

We hope that you will find it informative and easy to use.

Picture of the Month – November 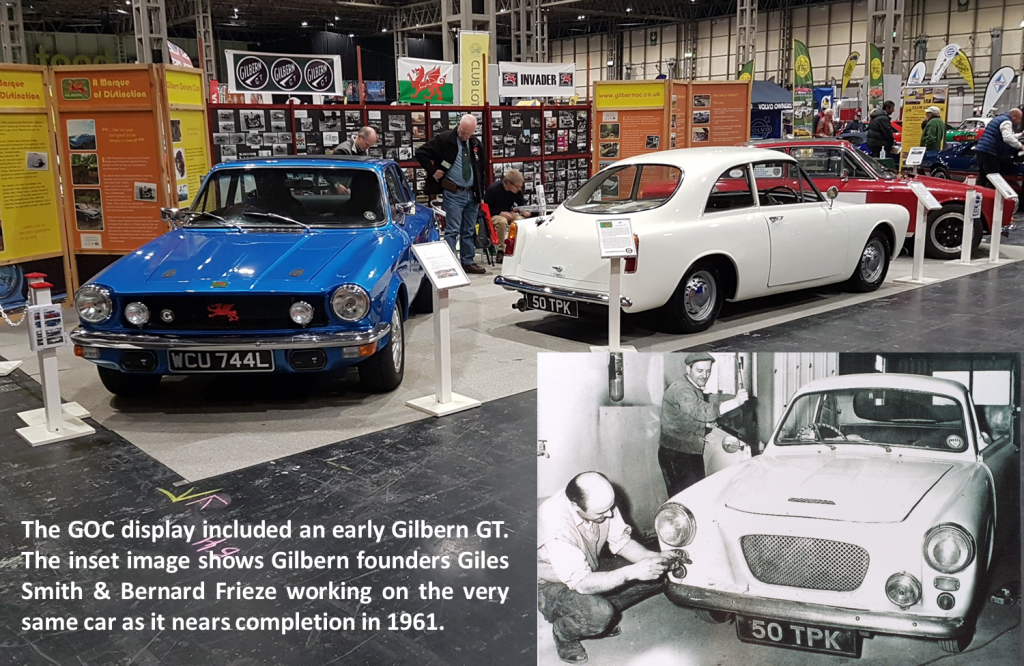 The Gilbern Owners Club displayed three cars at the Classic Motor Show at the NEC in Birmingham including an immaculately presented Invader MK3, a Competition prepared Invader MK2, and a beautiful example of a very early Gilbern GT.

The white GT was one of the very first batch of cars produced, ordered at the racing Car Show in January 1961 and remaining with the same family from new, passing from the original owner to his daughter, who has overseen a sympathetic restoration, completed this year, after many years off the road.

Please visit the Gallery pages to view more images of Gilbern cars from events around the country.

The Gilbern Owners Club was founded in 1969 by Martin Ingall, our President, when the cars were still in production. In November 1979, with the expansion of the Club’s activities, it was decided to incorporate the Club as a company limited by guarantee.

The Gilbern is a specialist car that attracts people who are interested in the vehicle they drive. Experience with other makes where the manufacturer has ceased production shows the importance of an owners’ club in the maintenance of the marque. Without this interest and support, the general condition of the cars may decline and spares may become harder to find, with a consequent potential drop in the value of the cars.

Our objective is to ensure the continued existence of Gilbern cars by encouraging interest and enthusiasm in the marque. We provide a range of technical services and organise activities and motoring events to bring together Gilbern Owners and enthusiasts.

One of the Club’s major objectives is to ensure that no shortage of parts occurs which would render a member’s car un-roadworthy or unusable. With the help of a wide range of suppliers, we have been very successful and most essential components are available.

A monthly magazine, Welsh Rarebit, together with this website are the main forms of communication with our members.