Competition activities in the UK were suspended for the spring and early summer 2020, but restarted in July although various restrictions and additional safety measures apply. For the latest COVID-19 Updates from Motor Sport UK follow the link below.

The Five Clubs Wiscombe hillclimb saw 5 Gilberns in action for 2020 meeting, although due to Covid measures the event was not open to the public or spectators and access to view the course was severely restricted.

After practice on the Saturday people could be forgiven for wondering how many of the Gilberns would be running by the finish on Sunday night.

First car up the hill was Mike Lamplough’s beautifully restored GT1800 with just 1 mile on the clock, but the engine died halfway up the hill.

Peter Swann and Chris Dennis went up ok in their Genie and Invader Mk 1 respectively, but then it was a long time before Keith Marchant appeared in his Invader Mk 3. His front right wing looked a little second-hand, with cracked fibreglass and a broken light lens. Keith had locked up approaching ‘The Gate’ and gone into the tyre barrier, but reversed out and carried on.

Brian Gent then came very swiftly up the hill in his usual ex Paul Scott GT1800.

Back in the paddock Mike found it was a blown fuse on the ignition circuit, replaced it, and the engine fired up. Five Clubs very kindly gave Mike an extra practice run, so he could do the timed runs. In the meantime Keith put a bit of tape round the wing and straighten out his timing strut. Thankfully that was all the drama for the day, and everyone did there 3 timed runs without any problems, all 5 drivers getting quicker with each run. 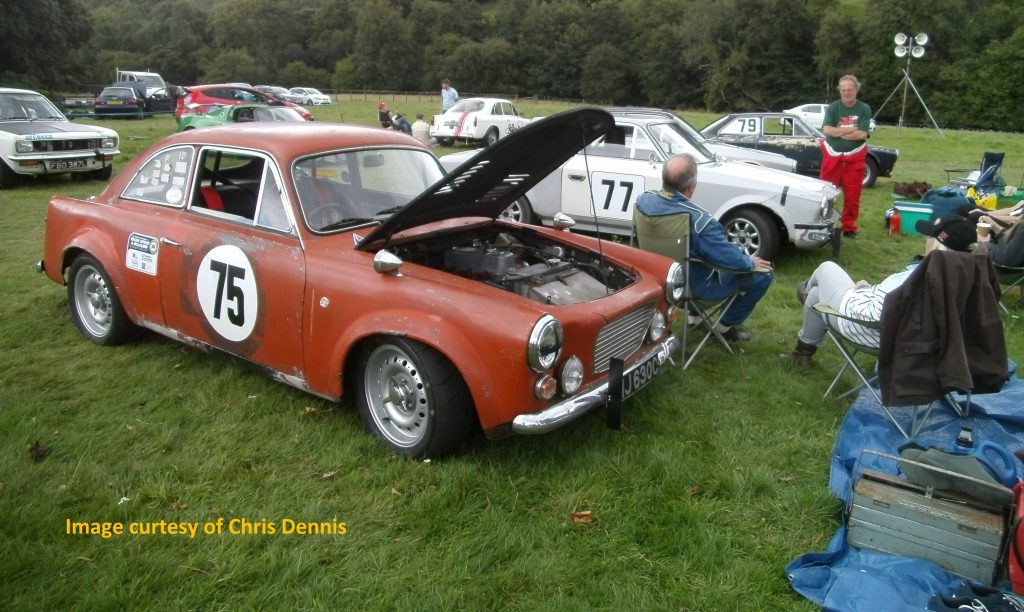 After some rain overnight it was a bright start for the Wiscombe Cup on Sunday. It was a dry track for practice and the first timed run, but it rained on and off in the afternoon for the last two timed runs, with everyone being slower. So the results for ‘quickest overall’ and ‘most improved from practice’ were all based on the first timed runs.

Sunday results were as follows:-

So Chris Dennis won the Wiscombe Cup by the smallest of margins 2/100ths of a second from Peter Swann.

Brian Gent was fastest overall both days, breaking his personal best and the previous fastest time by a GT at Wiscombe of 50.79 with his Saturday best time of 50.27, half a second quicker and winner of the Ken Young Trophy for the fastest Gilbern of the weekend.

For more pictures of Gilberns at Wiscombe in 2020 visit our Gallery section.     Racing Scene

From July 2020 motorsport has started to return to the UK with most events behind closed doors, but where there is plenty of open space at some race circuits they are letting the public in with reduced capacity, and social distancing. The exception is Elite Motorsport like Formula One and British Touring Cars.

The first hillclimb weekend at Shelsley Walsh in 2020 was on July 25th/26th , held behind closed doors. This saw Brian Gent making his first visit to the venue in his regular Gilbern GT1800. He competed both days in the Welsh Trident Engineering Speed Championship all comers class. On Saturday he managed to stay ahead of a Formula Ford Nike despite a misfire with a very respectable time of 43.97 seconds.

Sunday morning saw Brian trying to cure the misfire, but it kept coming back. So he decided to withdraw from the afternoon runs, as he didn’t want to cause an incident by breaking down on the course. Two more Gilberns appeared on Sunday. Chris Dennis, another Shelsley novice, joined Brian in the Welsh Championship class with his Gilbern Invader Mk 1. Chris found his Ford V6 power really suited the hill with him getting quicker throughout the day, finishing up with a time of 48.90 seconds.

Shelsley is Chris Jones’s local hillclimb, but he was having his first outing in the ex James Goodwyn Gilbern GT1800, in the Pre 75 Classic Saloons and Sports Cars handicap class. Chris got quicker all day, and finished up with a time of 50.21 seconds, on scratch. On handicap Chris was just over half a second off his target time of 49.62 coming a respectable 8th out of a class of 13.

The event was very well run with social distancing, and temperatures being taken by the Midland Automobile Club, making all 3 Gilbern competitors feel very safe.

For more pictures of Gilberns at Shelsley Walsh in 2020 visit our Gallery section.     Racing Scene

Lockdown is Locked in the Garage

The most active area of competition in early 2020 has been in the workshops of Gilbern owners during lockdown. None more so than Mike Lamplough who is doing a chassis up rebuild of his racing GT1800. The car came back from the paint shop just days before the lockdown in the UK. Mike is making good progress with the GT in his garage at home, and is hopeful of it being ready for the Castle Combe Autumn Classic in October, if there is any racing by then.

Gilberns in Competition over recent years

2019 saw Bob’s fifth visit in a row to the Historic Spa 6 hours with him entering his well raced GT1800, with the same driving team of himself, his son Sam, and historic ace Will Nuthall. Practice went well, with the car being a couple of seconds quicker than last year. The Gilbern lined up 90th on the 104 car grid. 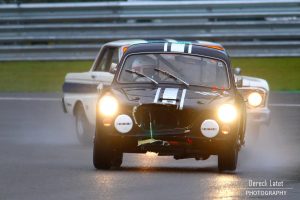 The start of the 6 Hours was wet, and this really suited the Gilbern, and Sam. In the first 13 laps he went from 90th to 60th place. Despite some brake problems they held their position, but the MGB engine was using a lot of oil, and they had to keep filling it up at the pit stops.

Sam also did the final stint, and had got the Gilbern into 43rd position, but with 15 minutes to go, he had to make a slash, and dash for fuel. This dropped the GT1800 down to finish a still excellent 46th overall (the same as 2018), and 10th in class. Even more impressive was the fact the same car, and team have finished 5 Spa 6 Hours in a row, possibly a unique record. 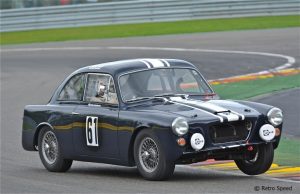 For the 2018 Spa 6 Hours, Bob Binfield had again entered his Gilbern GT1800 with his son Sam and Will Nuthill co driving with him. There was however one big difference this year, they had a second fuel tank. This meant they could do the 6 hours on just one fuel stop, but they still needed two more pit stops to change drivers.

Practice was trouble free, and they lined up on Saturday afternoon with over 100 other cars, for the start of the 6 hour race, with Bob behind the wheel. After an hour and a half, there was a safety car period, so Bob dived into the pits to change drivers with Will. Bob had been running in 74th position dicing with MGBs and 2-litre Porsche 911s. Will did a great stint moving the car up to 55th position before handing over to Sam, and this included doing the fuel stop in the middle of his stint. Sam also did a fine stint, putting in his fastest lap on the very last lap of the race, to finish in 46th position. The Gilbern had run faultlessly for the whole race.

There was much celebrations amongst the team, with the Gilbern gate-crashing the winning Ford GT40’s party and presentation in the pit lane. Looking at the results the next day 46th position put them 6th in class, beating every MGB and Porsche 911 in their class bar one of each. This was their best ever result at Spa.

A Gilbern returns to the Chateau Hillclimb 2016 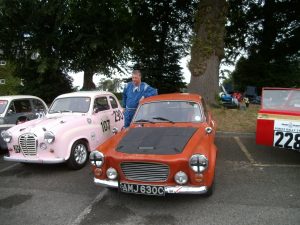 Brian Gent secured a prestigious entry in 2016 for the recently revived (from the 1960s) Chateau Impney Hillclimb, in his ex- Dr Paul Scott GT1800.

We believe this is the first time a Gilbern has competed at Chateau Impney since 1964, swapping times with A35s and Lotus Cortinas throughout the weekend.

In the same year Brian also did the Wiscombe Cup, & Brighton and Hove’s Eagle Sprint at Goodwood in August, where he was in a large class of modern cars.

AMJ 630C is a very historic GT1800, being the ex Dr Paul Scott which he raced, and hillclimbed extensively throughout the Sixties, Seventies, and Eighties. Brian Gent brought the orange car back to the track from a long layoff in 2014.

In 2014 Mike Bell ran his lovely blue GT1800 at both the Goodwood Revival, and the Spa 6 Hours 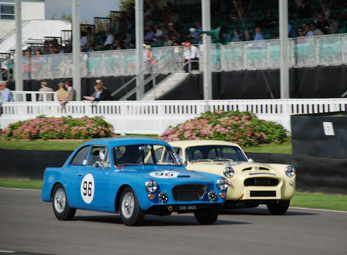 At Spa Mike, and co-driver Iain Rowley had an almost trouble free run to finish the grueling 6 hours, coming 19th out of 25 in class. 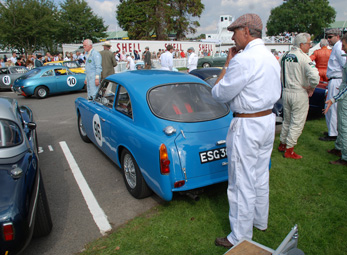 This class was mainly made up of 2.0 Porsche 911s, so very stiff opposition, but the Gilbern very much held its own. 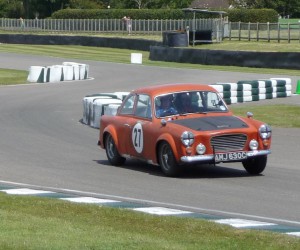 Another historic GT1800 (AMJ 630C) is the ex Dr Paul Scott car which he raced, and hillclimbed extensively throughout the Sixties, Seventies, and Eighties. Brian Gent brought the orange car back to the track in 2014 at the Five Clubs Wiscombe Park hillclimb, where he won the club’s Wiscombe Cup

This Cup, first awarded in 1972, is for the best Gilbern on a handicap system, at a selected Wiscombe Park hillclimb each year.

Many 3.0 litre V6 cars have competed over the years. 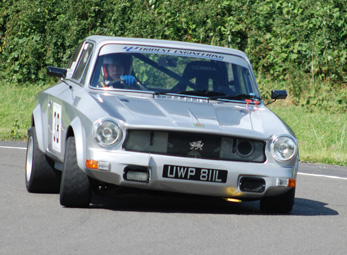 Mike Griffiths debuted his immaculate silver Invader Mk 3 in 2014, but this is an Invader with a twist. Mike has replaced the V6 engine with a 2.3 litre 4 cylinder engine from his Ford Escort rally car. The highlight of his first year in 2014 was beating 16 of the 18 Ferraris competing at the August Curborough sprint. 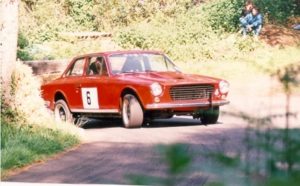 History of Gilberns in Competition

Only one Gilbern model was ever FIA homologated in period, this was the MGB powered GT1800, however privately prepared cars were a common sight in many forms of competition, and several cars were prepared or supported by Gilbern Dealers.

Today there are an increasing number of both the GT and later 3ltr cars running in historic events, as drivers discover they are a competitive alternative to many more common vehicles.

For more information of the history of Gilbern cars in motor sport please refer to the History page on this Website.  Gilbern History 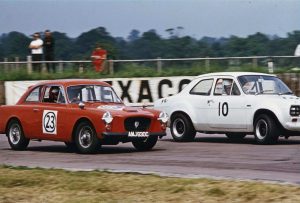 This photograph of AMJ 630C was taken in 1968 at Copse Corner, Silverstone

From it’s formation in 1969 when Gilbern Cars were still in production, the Gilbern Owners Club has supported and encouraged members to use their cars in motor sport. This support continues to this day, with many experienced competitors available to offer advice and guidance, GOC Members will find full contact details in the Club’s monthly magazine, Rarebit.

For the latest information from Motor Sport UK please follow the link below.

The link below will take you to the Motorsport UK Website.

The link below will allow you to view the GOC Safeguarding Policy.